The Future of Retail in South Africa 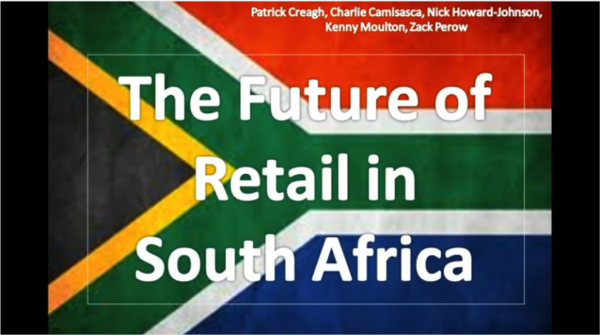 This research question seeks to uncover the future of the retail landscape in South Africa. It begins with an assessment of the current state of affairs in the country with regards to certain variables that the researchers have identified could potentially alter the future of this landscape.  These include Electronic Commerce, technology, and the size of the middle class.  Then, the researchers create forecasts related to these forces of change which resulted in potential futures for the state of the retail landscape. The researchers chose to examine South Africa due to its status as an emerging economy and its regional influence in Africa.  In terms of E-Commerce, the researchers discover that the percentage of individuals with access to the internet has been rapidly increasing of late, and project it to continue to do so.  Also, total online sales have been steadily climbing in the past 9 years.  With regards to middle class growth, the number of people who spend between $2 and $20 per day has grown from 1.7 million in 2004 to 4.2 million today.

In general, the overall state of the economy has been improving, and the researchers project it to continue to do so. However, cyber-crime and security in general have been problem areas for South Africa, costing the economy $102.5 million annually. These two factors, an improving economy and a lax level of security, led the researchers to identify the “Money Never Sleeps” Scenario to be the most likely. This scenario creates a difficult situation for companies because there is simultaneously a booming economy with a body of wealthy customers that is ripe to be tapped into and a dangerous, crime- ridden environment that is hostile to retailers.  The researchers recommend retailers consider merge and acquisition opportunities with major security firms.